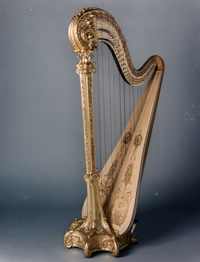 The harp is one of the oldest musical instruments in the world. The earliest harps were developed from the hunting bow. The wall paintings of ancient Egyptian tombs dating from as early as 3000 B.C. show an instrument that closely resembles the hunter’s bow, without the pillar that we find in modern harps.

The single action harp achieved great popularity throughout the rest of the 18th century as was evidenced in the French Court by Marie Antoinette; perhaps, the most famous player of this instrument. The harps of this period were magnificently decorated with relief carving, lavishly gilded and hand painted. Besides being musical instruments they were undoubtedly prized as object d’art when displayed in the gilded salons of the era.

As music evolved it was also necessary for the harp, if it was to maintain its popularity, to move with the times. Instead of only being limited to eight major keys and five minor keys, it had become vitally important for the harp to be able to played in all keys. As a result of this need, Sebastian Erard obtained a patent in 1810 for the Double Action pedal harp.

The 21st century holds great promise for continued popularity of the harp as is evidenced by the myriad festivals, conventions, societies, harp builders, music, performances and career opportunities available to harpists.

From Medieval to Modern, from Classical to Jazz, from Acoustic to Electric. The harp is an instrument steeped in tradition yet open to change and for many it is more than a mere instrument, it is a calling.